A day off (and the thing I was remembering about macaroni,) part one

I have two days off from the job I go to now. Today I will do things and tell you about them. So far, mainly, I had a mocha, read some stuff online, fed the dog, filled and ran the dishwasher, thought about numbers and sadness, and looked at this serendipitous image The Place reminded me of. It's serendipitous because I made a baked rigatoni dish last night, and I thought about it being stuffed shells instead, but I was tired. So I made sauce, layered it with the noodles and a ricotta mixture, topped it with mozzarella.

And then today here was this "memory." 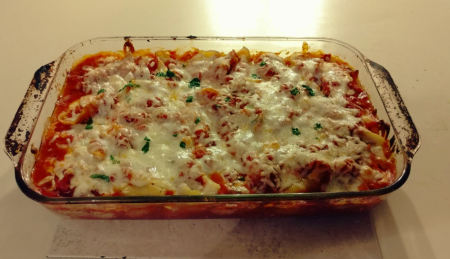 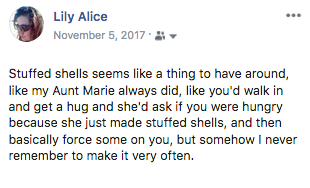 The thing I was actually remembering is that they never said pasta back then, at least not my Kansas City Italian relatives whose parents were from oldcountry. Grandma and Aunt Marie called everything noodles or macaroni, except yes, there was spaghetti, mostaccioli, manicotti, and lasagna. I will not try to write any of these things phonetically, but if you chop off all the endings, you are definitely doing it wrong. Only the east coast ones do that. And no short o like in cot. There's a lot of subtlety to it, though. Anyway, Aunt Marie made these stuffed shells, but it was all noodles, unless it was macaroni. Little macaroni shells, macaronis, corkscrew macaronis, etc. Spaghetti noodles, lasagna noodles, and so forth.

I don't know what Aunt Helen called any of it, probably she and Uncle Bob made up their own language for it all. They were like that. But when pasta salad became a thing, Mom had to explain to me about pasta, because I really didn't know.

It's just paste, by the way. Flour and water, and sometimes egg. You can glue things with it if you don't cook it.

The comments to this entry are closed.

Subscribe to this blog's feed
Blog powered by Typepad